History of Our School

St Mary’s School has a long and proud history of serving the catholic community in the wider Northcote area.  St Mary’s Parish is one of the oldest parishes on the North Shore of Auckland.

The Gladstone Hall, which no longer exists, was built in the 1880s as a community hall, and was eventually purchased by the Catholic Church in 1916 for ₤500. This formed the basis of St Mary’s Parish as the hall was converted to a church.

In 1933 the first Catholic convent was opened by the Dominican sisters on Onewa Road. Their convent was burned to the ground by a fire caused by a kerosene lamp the nuns had left on, to keep the chicks they were rearing, warm. It was replaced a year later. Our school still occupies the original site. The school was extended in 1953.

The nuns opened a secondary school in 1953. In 1967, due to an increasing role and a lack of room for expansion, the high school moved to Henderson. At this time, the Mercy Sisters took over the convent and the primary school on Onewa Road.

With an increase in the number of parishioners in the area, the old church was replaced and the new building was consecrated in 1969. The parish hall was opened in 1988.

In 1970, the old high school became De Paul House. Since 1986, De Paul House has provided housing and family support services. It responds to the needs of homeless families. De Paul House accepts families of all nationalities and religions. The school enjoys a warm connection with De Paul House.

A large part of St Mary’s School was rebuilt in October 2016. The equivalent of ten new classrooms (Catherine Block) was erected and a number of the old classrooms, demolished, as the school received a facelift. The older existing buildings were renamed as Dominic Block, to acknowledge the Dominican origins of our school. At the same time as Catherine Block was opened, a new Tiger Turf area and courts were installed. The school benefits from an extensive site, with fully-drained fields, a swimming pool, playgrounds, an animal corner and Tane’s Trail (a nature walk found to the rear of the new Catherine Block). In 2018, a Marian Garden dedicated to Our Lady, was opened on the hill directly outside the new Catherine Block and in June 2020, a canopy was built outside of Catherine Block, providing extensive shelter and shade for the site and a multi-purpose all-weather area for play and gatherings. This area benefits from being wired for light and sound. It is exciting to see how the school might develop over the coming years. 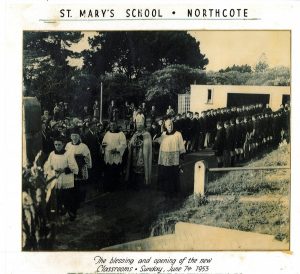 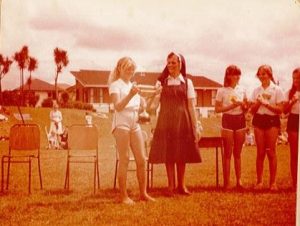 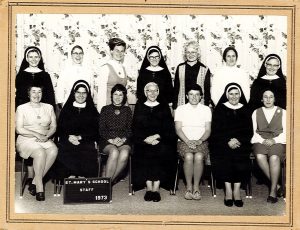